Probably my biggest takeaway from this film is that while a scythe looks cool and makes for great promotional poster art, it is ridiculously cumbersome as a murder weapon. Oh, and that Nile crocodiles in Texas can both shrink in size when pursuing prey in tight quarters and eat several adult-sized humans in a single night.

Hooper again exploits our deep-seated collective fear of backwoods Texas to explore something I’m still not quite able to put my finger on in the horror hotel genre meets Jaws flick, Eaten Alive. Apparently Hooper had some creative differences with the producers that lead to some scenes being helmed by a different director. Perhaps this can explain away why this movie has so many elements that could have made it great, but still manages to fall short. In the end this is a pretty clunky film, but with some cool components, great cast and soundtrack, and a campy plastic crocodile that morphs into different sizes that make it worth checking out.

So the set-up: The film opens at a sleazy country brothel run by Miss Hattie (Carolyn Jones, The Addams Family) with “Name is Buck, I’m rarin’ to fuck,” Buck (Robert Englund, Nightmare on Elm Street) trying to force newbie prostitute Clara Wood (Roberta Collins, The Big Doll House) to do pervy stuff she doesn’t wanna do. Of course, Miss Hattie takes the good ‘ol boy Buck’s side in the dispute and banishes Clara from the whorehouse. Well, it’s out of the frying pan and into the fire for poor Clara as she stumbles over to the Starlight Hotel, a dilapidated mess of a place in the swamp where she meets a similarly dilapidated mess of a mental case, Judd (Neville Brand, Mad Bomber, Stalag 17), who owns it. Not to spoil too much, but it doesn’t end well for Clara or just about any man, woman, monkey, or small dog that happens to find themselves at the Starlight that evening.

While watching this I kept wondering what Judd’s motivation is for undertaking all these killings. At first, he seems to be exacting revenge for all of the abominations and iniquities of the world embodied in the guests he encounters at his hotel. We know he’s definitely got a thing against prostitutes, but it’s certainly not a consistent motivation to kill. For example, he also chases a little kid under the house, with the scythe, no less…a pursuit that smolders throughout the film, but he ties her mother up to the bed without killing her. He mumbles to himself at times, so I’m guessing he’s hearing voices, but that’s never clarified. There’s also this thing where he takes off his glasses when he kills. Maybe an alter ego he takes on? Anyway, don’t expect any of this to be explained at any point. Judd’s just a creepy guy who acts nice and then ends up killing you for no real reason…first with a pitchfork and then with a scythe. And, yes, as the title gives away, Judd doesn’t quite finish off any of his victims, so they’re each “eaten alive” by a giant crocodile that Judd keeps in the bog next to his hotel.

While leaving things unexplained is what gives the horror in Hooper’s Texas Chainsaw Massacre such depth and intensity, it just doesn’t work here. In my opinion, this comes from Hooper’s decision to film the entire movie on a sound stage. I will say first that the genius of this is that it allows him to create a discrete and completely fictional universe, where the rules of the real world don’t necessarily apply. The dominant red hue cast in the hotel scenes really does create an alternate reality kinda feel that intensifies just how cut off from sanity the hotel is. The downside, of course, is that in the process it cuts the viewer off from any sense that this is real, and forces us to start finding holes in the narrative leaving us asking questions like “why any of this is happening?” In Chainsaw, it’s precisely the documentary feel that allows the viewer to abandon need for explanation and join the fictional victims in full panic mode. In Eaten Alive, only confusion results. 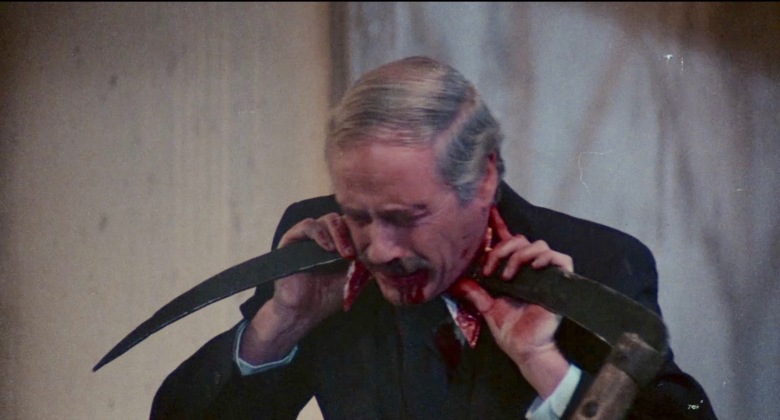 Finally, as ludicrous as the plastic croc is in this, I will say it is pretty absurdly amazing every time it appears on screen. Also, the crescendo of carnage in the final scene is intense enough not be missed. Unfortunately, it’s the only scene that even comes close to the level of anxiety that Chainsaw produces.

Although not quite a “for Hooper completists only,” and not among his top films, I would definitely recommend checking it out.