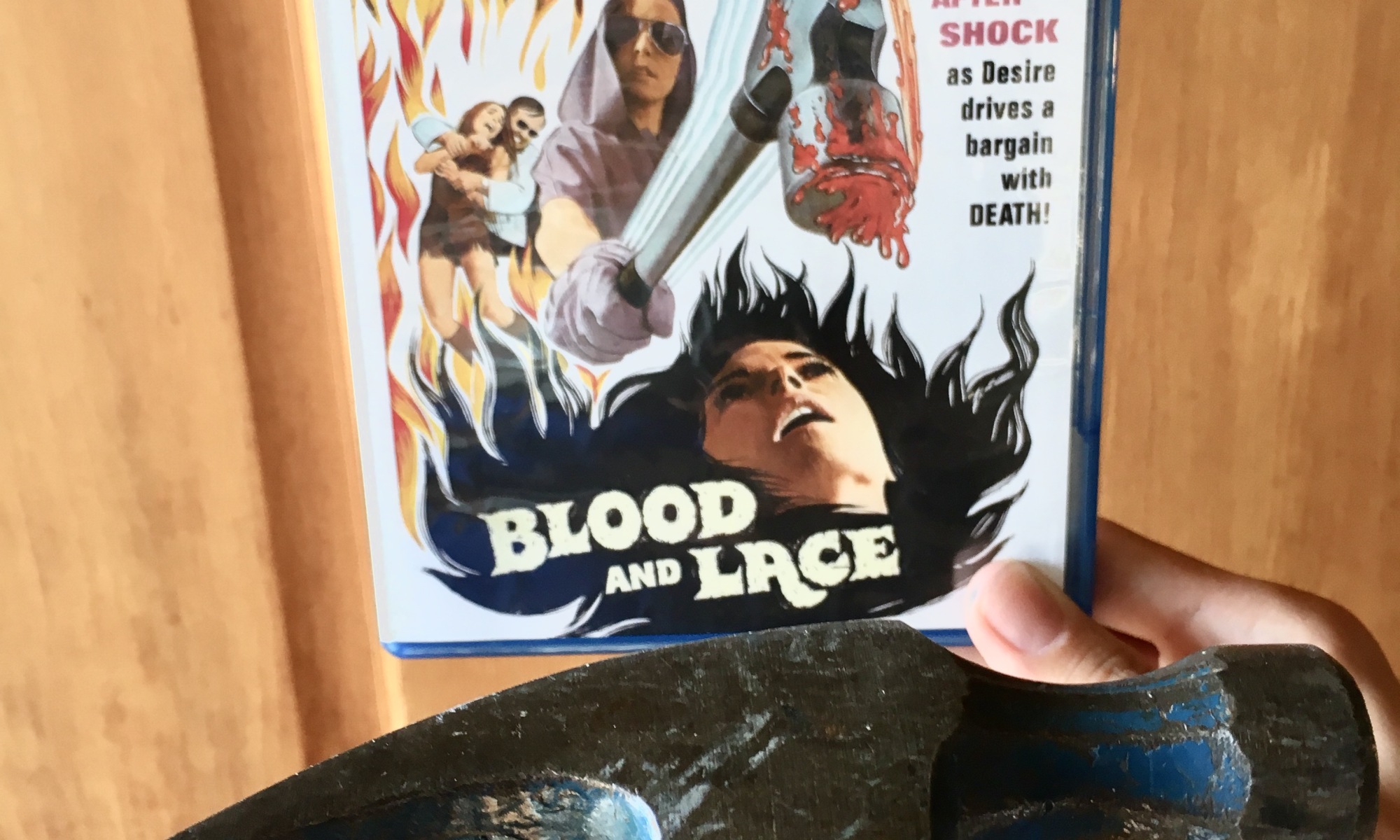 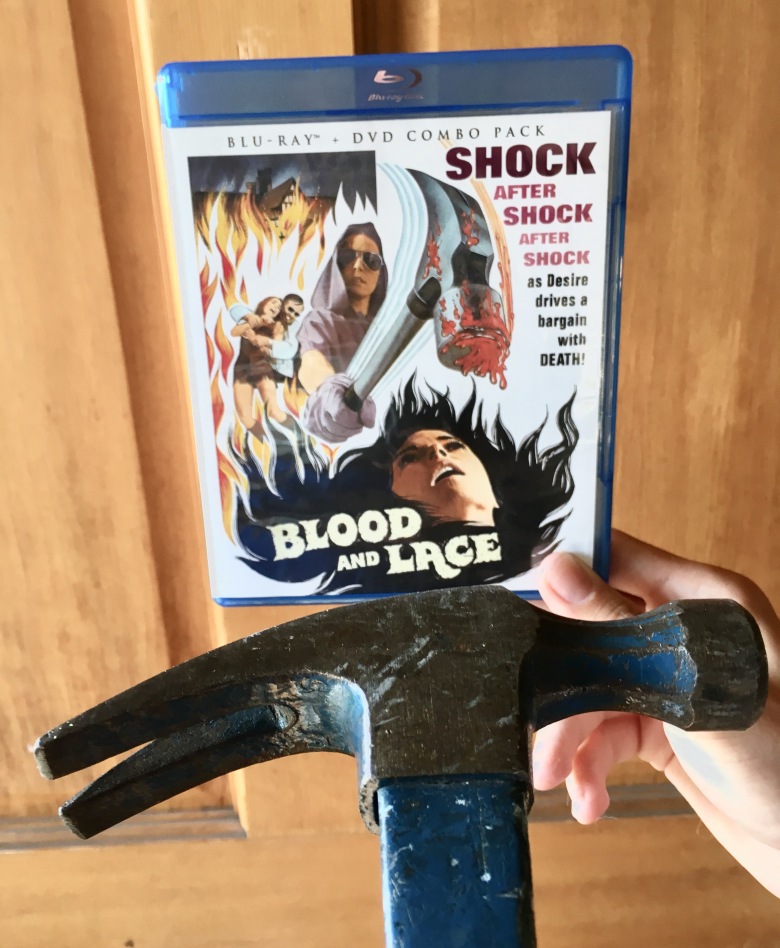 Do not confuse this movie with the stylish slasher Blood and Black Lace from Mario Bava (reviewed elsewhere by Nate Wilson). There is nothing stylish about Blood and Lace at all. It’s very straight forward in being a movie that’s not afraid of getting down and wallowing in the muck with child abuse, lecherous men, and murder. Broken adults lording power over damaged young people, and reveling in destroying any potential of a future all for a paycheck.

The movie begins with a POV shot of the killer holding a claw hammer walking through a suburban home at night. Upon entering the bedroom of a sleeping middle aged couple the claw end of that hammer is put to use bashing their heads in before setting fire to the place. We then hear a scream, and we’re now in the hospital with Ellie Masters (Melody Patterson, F Troop, The Cycle Savages) waking from a nightmare. The murdered woman was her mother with a lover. She tells Harold Mullins (Milton Selzer), the social worker who’s getting her ready for placement in the Deere Home that she’s wanting to find her real father. In the course of the conversation it’s revealed that her mother was the town floozie, before turing professional, and “every drifter, traveling salesman and school boy over 16 knew my mother.” An interesting note about this scene is that Ellie is voiced by June Foray, the voice of Rocky from the Rocky and Bullwinkle cartoon series which adds another somewhat creepy level to this movie. She feels she has no need to go to the Deere Home, but Harold points out that whoever murdered her mother is still free and may be coming after her.

In the heat of the moment, and against court orders, Ellie leaves the hospital with suit case in hand and heads out, walking along the train tracks in hopes of finding her father. Not even a mile into the journey she meets Calvin Caruthers (Vic Tayback – Thunderbolt and Lightfoot, and Mel Sharples of Alice fame), former employee of the Bijou Theater, and now a detective for the county sheriff. His deep interest in Ellie is a bit strange and borders on creepy. It’s during a conversation with Harold Mullins in a bar, he’s asked why he has such an intense interest in Ellie, he says when men get to be his age “you start sniffing around for some good breeding stock.”

Harold delivers Ellie to the Deere Youth Home where it’s obvious it’s not a place safe for anyone, no matter their age. Our first introduction to the home is when a teen attempts escape and is chased by the alcoholic handyman Tom Kredge (Len Lesser, Shack Out on 101, Truck Stop Women, and best known as Uncle Leo from Seinfeld). The frightened teen foolishly attempts to hide behind a tree when one of his hands is chopped off by the meat cleaver thrown by Tom. This is also the most graphic scene in the film, and sets us up for the insanity that lays in store.

The Deere Youth Home is run by Mrs. Deere (Gloria Grahame, It’s a Wonderful Life, The Todd Killings, Mama’s Dirty Girls), who is cold hearted and manipulative to the core. She runs the home like a prison camp, reminding the kids that if they don’t work they won’t be around much longer, and she’s always ready to slap any of them for the slightest of what she sees as transgressions towards her authoritarian rule. She’s someone you want to see get her comeuppannce. With the help of Tom she keeps the corpses of all the dead children in a meat locker in the basement to later be placed in the infirmary when county officials drop in for headcount. Harold, the world’s sleaziest social worker, is well aware that Mrs. Deere runs a crooked operation, but looks the other way with the promise of sex as part of the unspoken agreement.

There’s some great dialog throughout the movie, such as when Ellie is looking to escape, and lecherous Tom says he will show her how only if she does something for him. He pulls a bottle out of his back pocket, leans into her face and growls, “The way to escape? Whisky!” and begins groping her. There’s also the the conversation between Ellie and Walter (Ron Taft) the orphanage heart throb (read that back, yes, such a thing exists in a movie like this), when he tells her to give up on trying to find her real father, “The only thing she ever said was the first man that ever made love to her got her pregnant and ruined her figure. The only feelings she ever had for me was blame!”. You have to love the exchange between her and Bunch (Terri Messina) as they fight on the bed:

Bunch: Tell us about your mother!

Ellie: We don’t know anything about yours, except that she has four legs and barks!

A disfigured man with a claw hammer finally shows up at the orphanage for the final act and brings this to a close with some light violence. But none of that is as good as what happens at the very end. While not tilting into full on sleaze due to the lack of nudity, sex and excessive graphic violence, Blood and Lace does deliver on the shocks promised in the poster art. This is worth repeated viewing, especially the second or third time where the movie becomes even more interesting and slimy when you know how this all ends up. (MA)